Marvel's Loki and the Rule of God

Thor: Ragnarok opens in theaters this weekend, and with it comes the return of one of the best villains in all of comic book movie-dom: Loki. Played by actor Tom Hiddleston, the character of Loki is the adopted brother of Thor and a god of trickery, deception, and mischief.

He also says something I find compelling in the first Avengers movie. It comes as he terrorizes a group of symphony-going elites in Germany. After commanding them to kneel before him, he soliloquizes on humanity’s need to be ruled by a superior master. He says; “Is not this simpler? Is this not your natural state? It’s the unspoken truth of humanity, that you crave subjugation… You were made to be ruled. In the end, you will always kneel.” 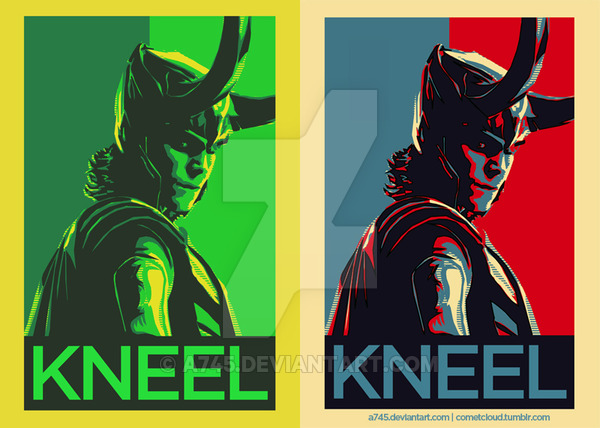 Loki’s speech is compelling because he is right. Not in that we crave subjugation. The fact is we buck against it, seeking autonomy. And not that this need to be ruled is an unspoken truth of humanity. Fact is, it is spoken. It is written. And this is where Loki is correct. We are a people made to be ruled. And one day we will all kneel. And all of this has been spoken by God Himself, in His Word. Philippians 2:9-11 says;

“Therefore God has highly exalted him and bestowed on him the name that is above every name, so that at the name of Jesus every knee should bow, in heaven and on earth and under the earth, and every tongue confess that Jesus Christ is Lord, to the glory of God the Father.”

In the end, as Loki says, we will all kneel. Not to some mystical god, or a comic-book creation, but to the one true Lord Jesus Christ, to the glory of His Father.

This is indeed what we were made for. We were created and designed not to be self-ruled, not for our own purposes, but for the glory of God. Isaiah 43:7 refers to God’s people as those “whom I created for my glory, whom I formed and made.” We were created for the glory of another, purposed for His rule and not our own. This is why the first element of the Lord’s Prayer is “hallowed be your name.” Our first aim in life is not to be our own glory, but the glorious reputation of the name of God. Our prayer and desire ought to be that God’s glory fill the earth.

Further to Loki’s point, the unavoidable reality is that we are all inescapably ruled. We will all be ruled by something, whether we like it or not. We all serve a master. The only question is whether or not our master is a good master. Are we ruled by what/who is good and beneficial to us? Consider Romans 6:16-18;

“Do you not know that if you present yourselves to anyone as obedient slaves, you are slaves of the one whom you obey, either of sin, which leads to death, or of obedience, which leads to righteousness? But thanks be to God, that you who were once slaves of sin have become obedient from the heart to the standard of teaching to which you were committed, and, having been set free from sin, have become slaves of righteousness.”

One master is clearly better than the other. One King is worth kneeling before. So it is that the Lord tells us to pray for the coming of God’s kingdom (Matthew 6:10, Luke 11:2). We beg for His kingdom because we need a good rule. We desire God’s reign because it is much better than our reign. So, come Lord Jesus, and may we all kneel. In the words of Loki, this is our natural state.  And we crave this subjugation, because subjugation under the righteous rule of Christ actually brings life, health, joy, and peace.